Return of the Warrior Prince (Part-I) 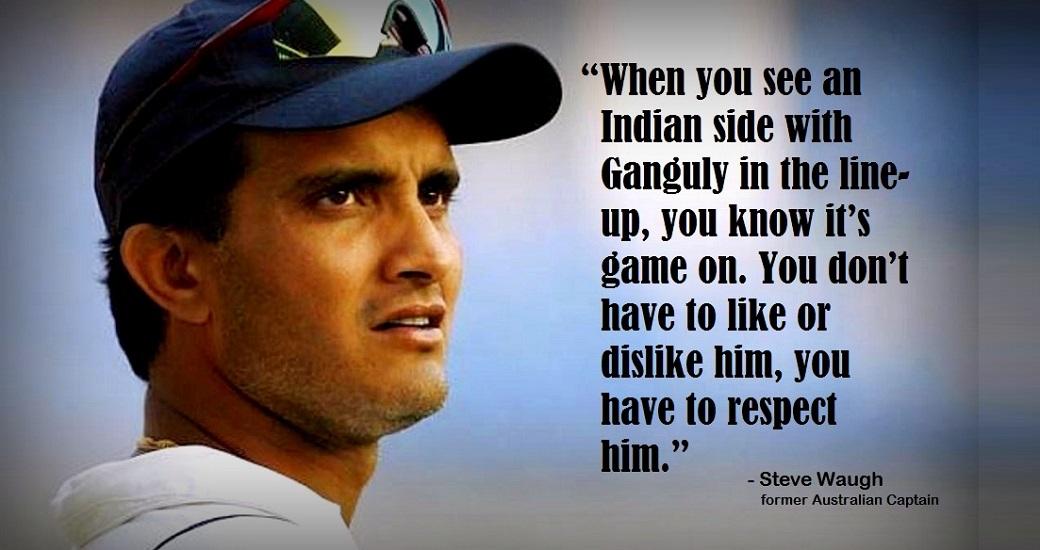 Saurav Ganguly’s return to the Indian cricket as the President of its national governing body BCCI is certainly going to revive my interest in the game which I had lost back in 2008 with his unceremonious departure from the team.

Cricket is the only outdoor sport that I have ever played, whatever little (of course, at street-level and mostly with a plastic or tennis ball) and till date this is the only game that excites me so much.

I was just crazy about watching cricket matches. I remember how I used to be glued to the television screen, with a self-made scoring sheet in hand, to record and enjoy each and every moment of the match. Sounds foolish now, but back then that’s how passionate I was about the game. I also remember the umpteen times I got myself late for school to watch ‘just one more ball’ and being reprimanded by teachers for listening to commentary in classroom on portable AM/FM radio with single-bud earphone popular amongst students those days due to its concealability. And, how disappointed I used to get at the sight of covered pitches on television screen, when rain played spoilsport on a match day.

Every time India lost a match, I would get so upset that the defeat just wouldn’t go off my mind for days together. Even as a grown up, it used to take a while for me to come to terms with India’s lose especially when it was against our arch rival neighboring country or when it’s due to the nonsensical Duckworth Lewis method rather than the poor show on the part of the ‘men in blue’.

However, all this completely changed when Ganguly finally had to bid adieu to first class cricket in 2008. I never forgot the way he was made to terminate his career by the then selectors and some of his fellow teammates along with the then Coach, who played a big role in dethroning Ganguly from captaincy and his subsequent ouster from the team.

I may not have blamed the ‘teammates’ for the ill treatment meted out to Ganguly had a single player from the team mentioned his name after winning World Cup in 2011. Instead, I remember, someone from the team surprisingly dedicate the victory to a former captain under whose Captaincy (with all due respect) Indian side lost almost double the number of matches it won (43 losses against 23 wins) in ODIs, the format in which the World Cup Cricket is played. Much later, Ganguly came out openly in a book published in 2018 ‘Eleven Gods and A Billion Indians’ authored by Boria Majumdar, a sports journalist, stating, “I think some people who Greg had become close to may have told him that with me around, he would never have his way in Indian cricket and that may have triggered a reaction”.

The whole episode left me feeling bitter towards each and every person even remotely involved in demeaning Ganguly. I was no more passionate about the game and almost stopped watching cricket (though I did watch a few IPL Twenty20 matches till Ganguly was part of the format). Even if I happened to be at a place where a cricket match was on, I noticed I was least bothered about India’s winning or losing the match. It absolutely made no difference to me. Such was the bitterness that this whole episode had left me with.

Now that he has returned, though in a new avatar, I would like to go back in time and recollect the whole episode that had made me feel so dejected that I’d kept myself detached from the game I loved the most.

It was in the year 1996, when Saurav Ganguly, fondly called ‘Dada’ or ‘Maharaj’ made his debut in Test Cricket. There was a national debate over his selection in the Team, but batting at No.3 on a greenish wicket at Lord’s, Ganguly’s 131 on his Test debut and 136 in the next test match at Nottingham emphatically proved that he belonged to the international stage.

He set a world record by winning four consecutive Man-of-the-Match Awards in One-Day International series against Pakistan in Toronto in the year 1997. He scored 183 of 158 balls in a do-or-die World Cup match against Sri Lanka in Taunton in 1999. India was one match away from being knocked out of the tournament when Ganguly added 318 runs with Rahul Dravid, helping India register an emphatic 177 run victory over Sri Lanka. Ganguly’s 183 was the highest ODI score by an Indian at that time.

In March 2000, Ganguly was appointed as Captain of the Indian side succeeding Sachin Tendulkar, who quit the Captaincy having lost the Test Series to South Africa. India won the ODI series 3-2 under its new leader Saurav Ganguly.  In January 2004, Ganguly became the fastest player in the world to reach 9000 mark in ODI. This feat was touched during his 82 an ODI against Australia at Melbourne.

During his tenure as Captain of Team India, whether it were mighty Australians, the English, or the ferocious Pakistanis, everyone got the taste of Dada’s tough temperament. Nothing was invincible; unconquerable for Dada’s army. It was under his leadership that Indian team touched new heights with its never before ‘fighting spirit’.

India beat Australia ‘the unbeatable’ on their soil 2-1 in the Test Series in 2001 (16 successive Test wins amply justified the adjective ‘unbeatable’ for Australia), and for the first time in the history of Indian cricket, India beat its arch-rival Pakistan on its own soil. In 2003, he led India to the Final of the World Cup Cricket after 20 longs years.

Behind all these achievements Dada’s captaincy played a major role. He believed in the young blood and infused the Indian team with the ‘killer instinct’ required to snatch a win from the claws of defeat.   Dada never hesitated to show his emotions. Who can probably forget the shirt-swirling celebration of Sourav Ganguly at the Lord’s balcony after winning the Final of 2002 NatWest Tri-Series ODI Tournament chasing the highest ever target of 326 then. It appeared as if India had won the World Cup. Such was Dada’s zest. His 10,000 runs in ODI are more than sufficient to show his batting brilliance. But, as we often see, every star player goes through a bad patch at least once in his career. This bad patch started showing in Dada’s career too.